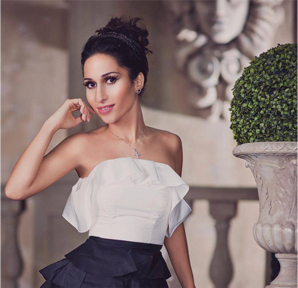 The young Russian Soprano graduated from the Moscow State Conservatory in 2011 and was a member of the Bolshoi Young Singers Academy for two years, where she has worked with Svetlana Nesterenko, Joan Rodgers, Diane Zola, Anna Bonitatibus, George Darden, Caroline Dumaux, Dmitri Vdovin and Laura Claycomb, amongst others. She has also had very successful collaborations with Kent Nagano, Gianandrea Noseda, Omer Meir Wellber and Dmitry Jurowski.

Svetlana continues to work at the Bolshoi Theatre as a soloist, singing main roles such as the title role in Tosca, Kuma in The Enchantress, Fata Morgana in The Love for 3 Oranges and Kupava in Snow Maiden. Outside the Bolshoi Theatre she has performed Elisabetta in Don Carlos at the Teatro Regio di Torino, Cio-Cio San in Madama Butterfly Teatro la Fenice, Amelia in un ballo in Maschera with the Dorset Opera, Tosca with the Vilnius City Opera, Theater St Gallen and Teatro la Fenice, and concerts with the Bournemouth Symphony Orchestra and the Berliner Symphoniker. She has performed at the Latvian National Opera, Teatro Petruzelli, Bari, Ningbo Concert Hall, China, Bolshoi Theatre, Tchaikovsky Concert Hall, Yekaterinburg Opera, Krasnoyarsk Opera, Moscow Conservatory, Sion Festival Switzerland and the International Opera Festival in Hungary. In concert she has sung Beethoven’s 9th Symphony, Strauss ‘Four Last Songs’, Wagner ‘Wesendonck Lieder’ and Verdi ‘Requiem’.

Highlights of the 2016-17 season include returns to Theater St Gallen and Vilnius City Opera for further performances of Tosca, Atila at the Teatro Luciano Pavarotti, Modena, Manon Lescaut at the Teatro Regio Torino, and concerts with the Slovak Philharmonic Orchestra.
Following her debut in Rome at the start of the 2017/18 season, Svetlana also appears in Il Trittico at I Teatri di Reggio Emilia, makes her role debut as Lisa, Pique Dame in a special performance dedicated to Dmitri Hvorostovsky at Krasnoyarsk State Opera under the baton of Dmitri Jurowski, and makes her house debut at Teatro Comunale di Ferrara as Giorgetta, Il Tabarro, and as the title role in Suor Angelica.
Of the 2019 Svetlana makes new production by Tosca in Teatr Wielki in Warsawa ( Poland)
On May of 2019 she makes her debut as Iolanta in Moscow “Iolanta” by Tchaikovsky.
Then she again sung Tosca in Teatro del’Opera Roma . On September of 2019 she closed season in Arena di Verona as Aida in “Aida” by Verdi with maestro Daniel Oren .
After that she made her debut as Leonora in Moscow Novaya Opera in “Il Trovatore” by Verdi.
On December of 2019 , She opened new season 2019-2020 as Aida in Trieste Teatro Lirico Giuseppe Verdi, in “Aida” by Verdi with big success.
2019 Svetlana received three 3 great prizes.
One prize from Papa Francesco in Vaticano, after her Tosca in Roma , now she is Dame Svetlana Kasyan ( it’s very important. Like Sir Elton John)
Then she received international prize- Premio Arturo Esposito di Sorrentino, after her Aida in Arena di Verona and on the November of 2019 she received next International prize in Rome – “Russian Rome”, like a best voice .
2020 concerts in Teatro Emanuele a Messina .
On February and on October of 2020 she had performed as the title role in “Madama Butterfly” by Puccini in Teatro Comunale a Bologna, also she had performances in Moscow in The Theatre “Nuova Opera” in opera by Vergi “Il Trovatore “ as Leonora.